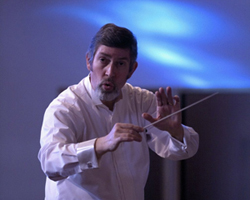 Donald Lawrence Appert has appeared as a guest conductor in Japan, Australia, Central America, and throughout Europe.  In Italy La’ovadese wrote, “…the performance of the ‘Serenade in C Major’ of Tchaikovsky, under the exceptional direction of Appert, was in such a style that it brought out the elegance and grace of the melodic lines with Mozartian inspiration.  …The L’Orchestra Sinfonica Città di Grosseto… performed the Barber ‘Adagio’ with rare effectiveness, emphasizing its intrinsically rich melody.”  Giornale di Sicilla praised his interpretation of Nielsen’s First Symphony as “lyrical with an airy freshness,” and his conducting as “precise, painstakingly accurate, and diligent.”  In the United States, he has appeared as a guest conductor of the Vancouver (Washington) Symphony, the University of Texas – Arlington Symphony Orchestra, the Eastern Washington University Symphony Orchestra, and the University of Central Arkansas Symphony.  In April, 2015 Dr. Appert guest conducted L’Orchestra Sinfonia Città di Grosseto in a concert featuring his Concerto in Mi for Piano and String Orchestra, which in May, 2012 he premiered in Italy as a guest conductor of Atelier d’archi della Valle d’Aosta, with Maurizio Barboro as soloist.  In July, 2015 he guest conducted the Academy of Soloists Kazakhstan in Massa, Italy, which included his Nara Variations for String Orchestra.  His Northwest Triptych, composed for the Oregon Sinfonietta, was featured in a December, 2015 concert by the Oradea (Romania) Philharmonic, at which he was the guest conductor

Dr. Appert is a member of ASCAP, with most of his works published.  The Oregon 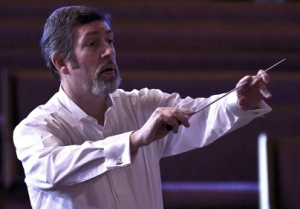 Sinfonietta will perform the world premiere of Dr. Appert’s Concerto for Viola and Orchestra with world renowned violist Brett Deubner as soloist in their March 13, 2016 concert.  Mr. Deubner will also perform with the Clark College Orchestra on March 9, 2016 Dr. Appert’s Fantasy for Viola and String Orchestra (originally for contrabass) that the Oregon Sinfonietta premiered in their November 9, 2014 concert with William Athens as soloist on contrabass, along with Hindemith’s Der Schwanendreher.  He will make a recording of Dr. Appert’s Concerto for Viola and Orchestra with the Oregon Sinfonietta.  With the Clark College Orchestra, he will record Hindemith’s Der Schwanendreher and Dr. Appert’s Fantasy for Viola and String Orchestra.  All three recordings will be included on a CD of Mr. Deubner’s performances.  Dr. Appert’s Northwest Triptych was premiered by the Oregon Sinfonietta on November 7, 2010, and was performed by state orchestras in Romania, El Salvador, and Slovakia in 2011.  ABEditore (Milan, Italy) published his Concertino for Bass Clarinet and String Orchestra and Vignette for String Quartet (or String Orchestra).  In June, 2013 Rocco Parisi’s Bass Clarinet Quartet premiered Quartetto Basso, which they had commissioned from Dr. Appert.  The work was included on their CD entitled A tempo, a Modo: Path tracking Vito Marsico, and may be obtained through www.amiranirecords.com.  Dr. Appert’s Nara Variations received its world premiere in December, 2007 by the Ashiya Chamber Orchestra in Kobe, Japan.  Additional performances in 2008 – 2009 of this work for string orchestra were by the El Salvador State Symphony, The L’Orchestra Sinfonica Città di Grosseto (Italy), Filharmonica “Milhail Jora” Bacau (Romania), and the Orquestra Sinfonica de Sant Cugat (Spain) with the composer conducting.  In October, 1998 the Ashiya Chamber Orchestra performed the Japanese premiere of In the Similitude of a Dream.  This piece for string orchestra was recorded by the Clark College Orchestra on its first compact disc, and received its Australian premiere in August, 1999.  The Ashiya Chamber Orchestra also gave the Japanese premiere of Thru a Glass Darkly in October, 1999, and in their November, 2001 concert they gave the world premiere of Elegy, a work they commissioned from the composer.  Dr. Appert has since conducted this work with orchestras in the United States, the Czech and Slovak Republics, France, Romania, and Portugal.  The Audienda-Chor premiered Who Shall Know? for a capella choir in Krefeld, Germany in November, 2002.  Dr. Appert’s music may be heard via the Internet on his publisher’s website at http://harmonicservicesgroup.com/c/donaldappert/orchworks.html or his website at www.maestroappert.com.

Dr. Appert received his Bachelor of Music and Master of Music in Trombone from the New England Conservatory of Music, and he earned his Doctor of Musical Arts in Orchestral Conducting at the University of Kansas.  Dr. Appert has studied conducting with Riccardo Muti, Otto Werner Mueller, Maurice Abravanel, Daniel Lewis, Fredrik Fennel, George Lawner, and Richard Pittman.  He was one of fourteen conductors chosen to participate in Helmuth Rilling’s Master Class at the 1992 Oregon Bach Festival.  His trombone teachers include Ronald Barron, John Coffey, and Tyrone Breuninger.  He has performed as a trombonist with the Kansas City Symphony, the Virginia Symphony, the Virginia Opera Orchestra, and the Springfield (Massachusetts) Symphony.  Dr. Appert is in his 26th year at Clark College, Vancouver, Washington, where he is a Professor of Music and Chair of the Music Department, and is the Music Director/Conductor of the Clark College Orchestra.  Additionally, he is the Music Director and Conductor of the Oregon Sinfonietta and the Artistic Director and Conductor of the Jewish Community Orchestra, both in Portland, Oregon.  Dr. Appert lives in Vancouver, Washington with his wife Linda, a coloratura soprano and active voice teacher.  They have two daughters – Laura, a violist, and Rebecca, a violinist.  Both are graduates of the University of Cincinnati College – Conservatory of Music.

Originally from Utah, Cindy is a graduate of the University of Utah in both conducting and education and then continued to develop her conducting skills with Kurt Masur , Riccardo Chailly and Maren Alsop – selected as apprentice for special projects in New York City, Chicago and Baltimore. Cindy has taught music in the public and private education systems for over 20 years and has conducted orchestras throughout the world.

Today Maestra Petty produces orchestral and choral concerts worldwide with Music Celebrations International for the concert series: “American Celebration of Music” throughout Europe, and Asia and also for the series: “National Festival of the States” which appears in Washington D.C. Chicago, New York and Los Angeles and includes performances in the Kennedy Center in Washington D.C, Orchestra Hall in Chicago, Benaroya Hall in Seattle, and Music Center’s Walt Disney Concert Hall in Los Angeles.

Ms. Petty firmly believes that music is essential to and complements every other area of our lives. It is cognitive, physical, expressive, goal oriented, aesthetic, exciting and rewarding. Music must be accessible to everyone to truly touch lives. Music is an aural sport, a lifelong skill which ensures the human element of life! It is work and recreation at the same time. It requires a high level of commitment and dedication to excellence! As stated by Ms. Petty, “Music is not just my profession…..it is my passion!”